We warmly invite you to work with us at BeBrazil, your DMC in Brazil for the best proposals for MICE and leisure travel.
Think trendy, swinging Rio with its beautiful Ipanema beaches and imagine yourself or your clients, lounging on a chair with a cocktail waiting at hand, or some active teambuilding on the beach. Then travel through our country with us, to the Pantanal wetlands, the lush Amazon forest, the amazing Iguazu waterfalls. Experience the Brazil carnival, travel through the dense rainforest and spot crocodiles or drink some great coconut juice in Bahia.
Brazil will literary take your breath away and dazzle, charm and enchant you. There is a reason that the big sport events take place in our country!

Further down the page: Read about our company * Travel facts. There is also a map of our country, our latest program idea and our latest DMC Brazil news.

This email address is being protected from spambots. You need JavaScript enabled to view it. 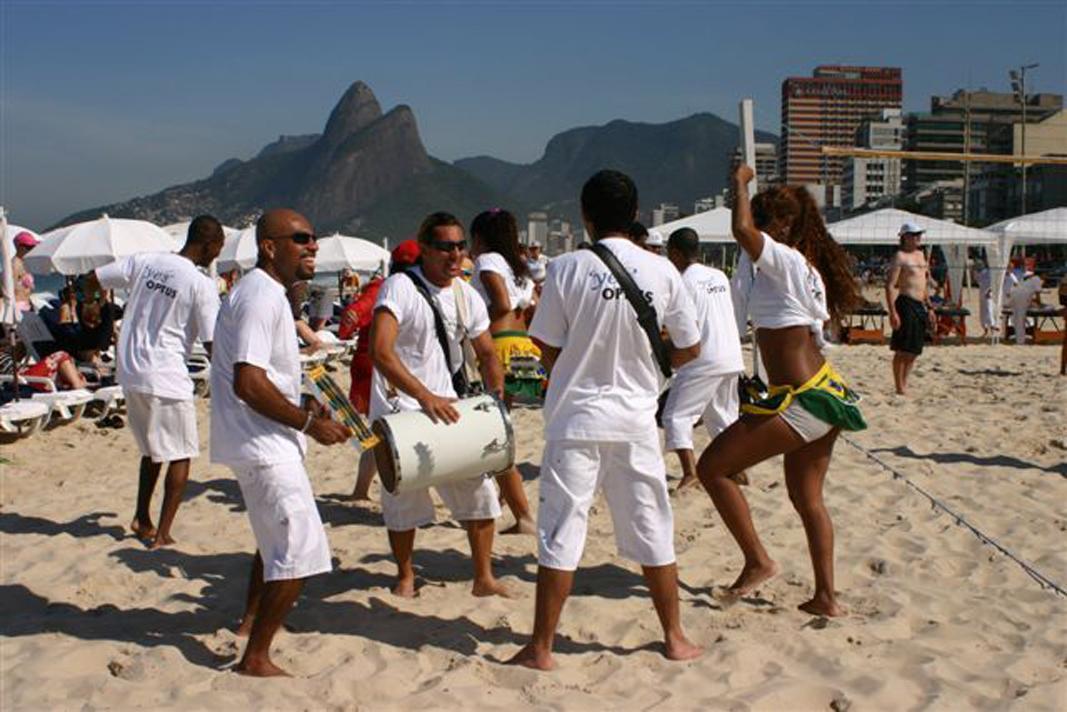 Amazon
Covering an impressive 7 of Brazil's 27 states, "The Green Inferno" covers almost 40 per cent of Brazil's total landmass. Although parts of the Amazon cover countries bordering Brazil, it is to Brazil that most tourist come if they want to take in the splendors of this most magnificent natural wonder. Things to do in the Amazon include bird watching, trekking/hiking, climbing and taking boat journeys along the river. Without doubt, a tour to Brazil is incomplete without a trip to the Amazon.

Brasilia
Brasilia was constructed by the country's leading architects, Oscar Niemeyer and Lucio Costa, in the 1950s to replace Rio as Brazil's capital city - which it did in 1960. That, however, doesn't mean the city's design has been well thought-out - it hasn't! To be fair, Brasilia was intended as the administrative capital of Brazil, a function it serves well to this day. However, the city's planners had not taken into consideration any private enterprise existing in Brasilia. Consequently all of the architects' good intentions went out of the window and the city is little more than a sprawling mess of modern building design. As such a new city, the city also lacks from having any real claim to heritage. All in all then, Brasilia is certainly worth a visit if you have the time, but if your time is restricted, go to all the other places first!

Iguassu Falls
Sometimes described as being one of the 7 natural Wonders of the World; in fact, Iguassu Falls are neither the widest waterfall in the world, nor are they the tallest. However, what it lacks in width and height it makes up for elsewhere. On the Parana River, the falls act as a natural border to the countries of Brazil, Argentina and Paraguay and compose of 275 cataracts in total. Best time of year to see the Falls is between October and December and as this is such a magnificent sight, it is highly recommended that you make arrangements to stay at least one night here.

Manaus
Located right in heart of the Amazonian Basin, Manaus is a popular destination for tourists looking for excursions into the exotic heartland of the Amazon. However, what was once considered to be one of the greatest wilderness outposts in the world is, as a result of years of over construction, no longer able to claim this title. Nonetheless, Manaus does offer two great attractions to its tourist visitors. The first is obviously the chance to travel further into the Amazon Basin, the second is the chance to see some of the world's largest sea-going ships come to port some one thousand miles inland, where they load and unload their wares (which are then taken, or brought from, further inside the Amazon.

Rio de Janeiro
The word exotic sums up Rio! But, Rio is also chaotic, sophisticated, open, friendly, busy and relaxed. It's literally is everything rolled up into one! Most people see Rio as sun, sea, and surf. Whilst Rio is all of these, it is also much more. As Brazil second most populous city , Rio is also highly regarded as being the educational and cultural center of Brazil - with both some of Brazil's leading universities and some of the most delightful museums and art galleries.
And, of course, there's always Carnival and samba time in Rio!

Pantanal
Considered one of the world's great wildlife reserves, any tour to the Pantanal needs to be carefully planned as the area is not ideally suited to the tourist - with little infrastructure in place. However, don't let this stop you from making arrangements to visit the Pantanal as this is truly a splendid place. Fishermen will also be attracted to the Pantanal as it has some of the best fishing in South America. But, it is for the birds that most visitors come to the Pantanal and bird watching here is truly amazing!

Recife
Located on the Gold Coast of Brazil (northeastern Brazil), Recife is a famous tourist destination for the package tourist. Recife is also well known for the number of canals and bridges that criss-cross this city. The city also has a number of good museums and churches. However, no visit to Recife is complete without a visit to the town's old prison - to make your visit there more interesting, it's now a shopping complex!

Salvador
Formerly Brazil's colonial capital city, the city of Salvador is located on the Bay of All Saints. Visitors to this wonderful city can revel in walking the narrow cobblestone streets that have changed little since the days when the city served as the slave center of Brazil.
Visitors to Salvador are also strongly encouraged to take a visit to the Igreja de Sao Francisco. The interior of this otherwise unremarkable church is covered in gold leaf. Not too far away from the church is the Farol de Barra, a 16th Century fortified lighthouse overlooking the second biggest bay in Brazil!
However, visitors to Brazil looking to see some of Brazil's colonial past are strongly advised to make the journey to Salvador, where they'll be enthralled with 17th century antiques on display at the Museu de Arte da Bahia and Museu de Arte Sacra.

Sao Paulo
Sao Paulo is big. The city is not only the most populous in all Brazil, but as the commercial center of Brazil it also contains some of the biggest skyscrapers in the country. However, visitors to Sao Paulo should not be mistaken into believing that Sao Paulo is all work and no play, once the sun has set Sao Paulo likes to party at some of the trendiest pubs and clubs in all of Brazil - some argue that Sao Paulo's clubs are more in-tune with western and modern styles than Rio!

Visit the Corcovado and Tijuca Forest by Jeeps

Is this really a forest in the middle of cosmopolitan Rio? On board of a convertible jeeps, drive through a narrow forest road , entering the Tijuca national park – the largest urban forest in the world.

A visit to the statue of Christ the Redeemer – one of the 7 Wonders of the Wonders open its arms to welcome you!!
Lunch

More about Be Brazil

We have become specialists in MICE and leisure travel. We have separate departments for both, as there are completely different requirements needed.

We have a team that we are proud off. We are flexible, hardworking and completely dedicated to you, our client.
I hope you will give us a chance! We offer you unbeatable experience and extensive product knowledge.

Brazil is an excellent destination if you are looking for breathtaking events.

Carnival in the streets

By far the oldest and most widely enjoyed form of Carnival revelry is found in the streets - over Carnival weekend hundreds of free parties take place across the whole city. This is the coming together of thousands of people with the fun-loving carioca soul to dance, parade and party through the streets.
Each neighbourhood in Rio has its favorite Bandas (pronounced bun-dush) or Blocos (pronounced blo-cush). These lively parties are centred around an orchestra which marches along a pre-determined route and is followed by hordes of enthusiastic samba dancers dressed in elaborate costumes, bathing suits, plain clothes, and even in drag.
The way a Bloco or Banda works is simple: first people gather at a well-known spot, such as a square or neighbourhood bar, and then after a couple of hours of ‘concentration’ the band starts marching its way down the streets. Whilst the street carnival can be found all over the city, it’s not always easy to know what is happening at what time and where, so we offer guide assistance to make sure our guests don't miss out.